"This is the first, wildest and wisest thing I know, that the soul exists, and that it is built entirely out of attentiveness” 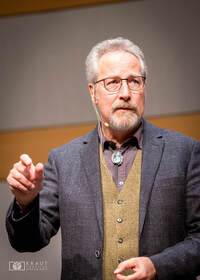 Francis Weller, MFT, is a psychotherapist, writer and soul activist. He is a master of synthesizing diverse streams of thought from psychology, anthropology, mythology, alchemy, indigenous cultures and poetic traditions. Author of The Wild Edge of Sorrow: Rituals of Renewal and the Sacred Work of Grief; The Threshold Between Loss and Revelation, (with Rashani Réa) and In the Absence of the Ordinary: Essays in a Time of Uncertainty, he has introduced the healing work of ritual to thousands of people. He founded and directs WisdomBridge, an organization that offers educational programs that seek to integrate the wisdom from indigenous cultures with the insights and knowledge gathered from western poetic, psychological and spiritual traditions.

For thirty-seven years Francis has worked as a psychotherapist and developed a style he calls soul-centered psychotherapy. As a gifted therapist and teacher, he has been described as a jazz artist, improvising and moving fluidly in and out of deep emotional territories with groups and individuals, bringing imagination and attention to places often held with judgment and shame. He has created three CD sets, two focusing on healing shame and one on “Restoring the Soul of the World.” His latest offerings are a 10-session audio series on "Living a Soulful Life and Why It Matters." and ​"The Alchemy of Initiation: Soul Work and the Art of Ripening." (See the Store page for more.)

Francis received a B.A. from the University of Wisconsin Green Bay and two Master’s Degrees from John F. Kennedy University in Clinical Psychology and Transpersonal Psychology. His writings have appeared in anthologies and journals exploring the confluence between psyche, nature and culture. His work was featured in The Sun magazine (October 2015) and the Utne Reader (Fall 2016). He is a frequent presenter and keynote speaker at conferences, bringing insight, poetry and a breath of humor to his talks. Francis is currently on staff at Commonweal Cancer Help Program, co-leading their week-long retreats with Michael Lerner. He has taught at Sonoma State University, the Sophia Center in Oakland and has been the featured teacher at the Minnesota Men's Conference. He is currently completing his third book, A Trail on the Ground: The Geography of Soul.